Ascend is the new winter star of the annual tetraploid ryegrasses for Australia. It is an exciting addition to the Australian pasture market, offering improvements to key annual ryegrass features, while maintaining important traits that made Winter Star II the bench mark in annual ryegrass.

The key breeding objective when developing Ascend was to improve seedling vigour and winter production while maintaining the superior late spring/early summer growth of Winter Star II. Most farm systems have a pasture deficit during autumn-winter and rely on supplementary feed to top up the ration. Extra pasture growth during this period reduces the need for expensive feed supplements and frees up labour for more rewarding tasks. The high quality late season feed that set Winter Star II apart from so many other annual ryegrasses has been maintained, capitalising on any late spring rain and extending the growing season compared to traditional annual ryegrasses.
During the breeding process rust tolerance has been continually enhanced, improving quality and animal acceptance when rust pressure is high during warm and humid conditions. By advancing these key traits, the breeding team have created a well-rounded and robust product for the Australian farmer.
Ascend has been trialled extensively for 5 years across many regions of Australia and New Zealand. During that time it has performed consistently and repeatedly showcased the traits it was selected for. For the past 2 years, PGG Wrightson Seeds has committed Ascend to the ultimate test: Australian farmers and their animals sowing it on leading farms across Australia. Farmers were asked to monitor these paddocks and objectively assess how they observed Ascend’s performance against other varieties, in particular Winter Star II. The results and feedback from farmers has been extremely positive indicating an exciting future for Ascend.

The increase in seedling vigour may shorten the time to first grazing, however it is important to closely monitor plants and prioritise strong establishment. Always monitor the growth stage of any establishing pasture plants and perform pull tests to ensure sound root development. A well anchored root system allows the young plants to tolerate grazing pressure. The importance of the first grazing for early plant and root development should not be underestimated. Tiller development and secondary root development are closely linked to the first grazing and these traits drive overall yield, grazing tolerance and late season longevity. Another important factor to consider when first grazing a new pasture is the stock class and time spent grazing. Choose a lightweight stock class and keep the first grazing as brief as possible to reduce hoof and pugging damage. Take extra care when soil is saturated as pugging is more likely.

During the breeding process, lines were subjected to grazing by sheep in order to select potential lines that performed better under intensive grazing. This is new in the selection of annual ryegrasses and offers robustness, genuine flexibility and overall confidence that Ascend has been thoroughly tested. Ascend expresses dense tillering and finer leaves when compared to Winter Star II. While dense tillering is not a common trait in annual tetraploids, it is a widely recognised benefit aiding temperate grasses to tolerate hard grazing, as demonstrated throughout the selection process of Ascend.

At each grazing throughout the year, leaving some residual leaf is critical to the subsequent pasture growth rates. If no leaf area remains after grazing, the rate of recovery will be much slower and overall yield will be compromised. Rotational grazing is recommended wherever possible leaving 5-8cm un-grazed residual. This will maximise yield potential by allowing Ascend to recover quickly and ensuring the next grazing can occur as soon as possible.

Ascend is an ideal option for fodder conservation such as hay or silage due to its late maturity. As a tetraploid, the quality will be exceptional, and including legumes in the mix will increase the quality even further. Time of cutting is a compromise between quality and quantity. However, utilising a late maturing variety such as Ascend offers key features when producing hay and silage such as:

While Ascend will have higher late season quality than an early maturing Tetila type annual ryegrass, grazing any annual ryegrass late in the season can be challenging as quality declines quicker than Italian or perennial ryegrasses. It is therefore important to prioritise the grazing and harvesting of annual ryegrass before later maturing species, this maximises the utilisation of the high quality vegetative growth prior to the plant going reproductive.

Ascend was bred by Michael Norriss, Programme Leader for Grasses at PGG Wrightson Seeds in New Zealand. Michael has had a close connection with the Australian market over many years and has been responsible for breeding high performing varieties such as Feast II, Lush AR37, Reward Endo5, Maverick GII, Quantum II MaxP and Winter Star II.

The breeding of Ascend started with elite plants selected from Winter Star II and crossed with another elite variety. From this breeding pool lines were subjected to extensive row and plot testing, from which Ascend was selected. Hard sheep grazing was included during early selection to ensure the end product was robust. This resulted in a plant that has a stronger tillering capability and more prostrate growth habit compared to traditional “westerwold” type annual ryegrasses. Most traditional tetraploid annual ryegrasses have more erect tillering and broader leaves which is often mistakenly associated to higher yield. Measurements show that dense tillers and finer leaf types can yield as much as the broader leaved traditional tetraploids and perform well under intense grazing. The key traits of interest throughout the trialling process included:

Ascend tetraploid annual ryegrass can be utilised in many different situations and environments. Therefore, Ascend’s sowing rate should be circumstance specific. As a guide only to the sowing rates of Ascend:

When oversowing into a kikuyu based pasture, increase the sowing rate to 50kg/ha to better compete with the highly competitive kikuyu. Research by DEPI (Project 3030, 2011) and PGG Wrightson Seeds (2003-2015) demonstrates the profit maximising sowing rate of annual ryegrass in drilled monocultures (without clover) is 35-40 kg/ha. The research was conducted in a range of environments including high and low rainfall regions across south eastern Australia (winter dominant rainfall). Winter yield increased in each region regardless of total annual rainfall. This is because during winter in south eastern Australia, growth of emerging pasture is less limited by nutrient and water availability (often available in excess), and more limited by access to sun light and low soil temperature. Increased sowing rates in annual and Italian ryegrass increases light interception in winter, improving winter pasture growth rates. Once plants are fully tillered in spring the benefit declines.

for more information on sowing and establishment download the Ascend forage focus below.

Getting the best from your pasture 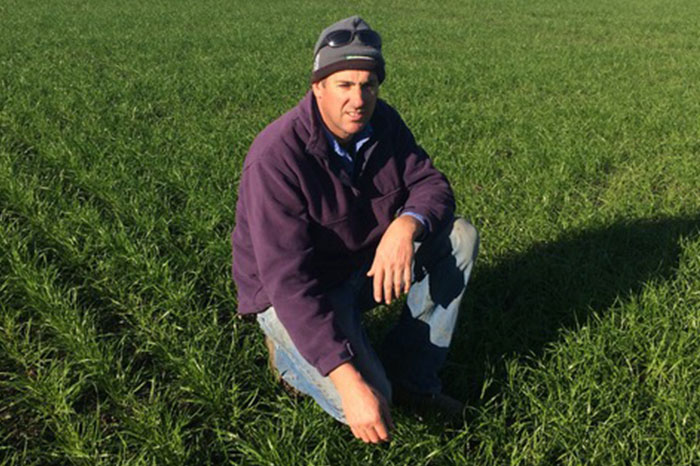 Dry matter production of Ascend is up on Winter Star® II, which I would put down to a very quick and early establishment and it grows a huge amount of dry matter prior to winter, but carries on, I believe,  very well through winter compared to other annuals we've grown.

For 75 years we've been giving farmers the best advice for their farm. Our sales agronomists are here to help.