Ascend - Taking off in Australia

Farmers are set to benefit from a new annual ryegrass coming to the marketplace in 2018, which will deliver faster establishment and continued quality late into the season.

The new offering from PGG Wrightson Seeds is called Ascend and will be welcomed by growers looking to fill a winter feed gap, just like Robbie Tole from ‘Greenvale’ at Cressy in Tasmania.

He is also a production seed grower for PGG Wrightson Seeds, starting with Winter Star® II annual ryegrass in 2015, the variety which Ascend will replace.In 2016 Mr Tole grew both varieties, before just focusing on Ascend for seed production in 2017, and being an annual ryegrass, it suited his system well.

“We harvest peas or poppies in late January, which allows us to plant an annual ryegrass following that crop,” he explains.

“It makes our feed budgeting quite easy, because we know within five weeks we’re going to have good dry matter production for winter.”

Having grown Winter Star® II for two years and Ascend for one, Mr Tole says the experience has highlighted to him how fast Ascend establishes at sowing time.

“Dry matter production of Ascend is up on Winter Star® II, which I would put down to a very quick and early establishment and it grows a huge amount of dry matter prior to winter, but also carries on, I believe, very well through winter compared to other annuals we’ve grown,” he says.

“Fast establishment and continued late season production of quality feed through winter are absolutely critical for our system, which is driven by growing as much dry matter as we can.” 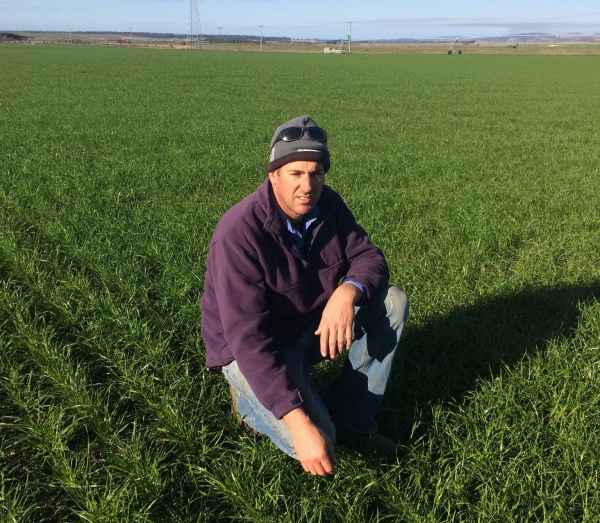 In 2016 Mr Tole sowed Ascend quite late, on the 8th April, with 150 kg/ha of DAP fertiliser and two irrigations. The first grazing was in the first week of June, coming a month earlier than planned.

“I was saving Ascend for a lambing paddock, but we were forced to put stock onto it to control the growth, it was well past the three-leaf stage and was lodging, so we had to graze it to keep quality, which is a good problem to have,” he explains.

“I had thought by sowing that late in the season that we wouldn’t have got that growth and I would say it’s shown up again in 2017, we’ve sown one paddock about the same time and the way it’s going, we’ll definitely be grazing it again in mid-June.Winter Star® II is close to Ascend in terms of production, but I noticed the difference in Ascend in terms of early establishment and how it hangs on into the colder winter months, that’s been a big eye-opener for me.”

A greater supply of dry matter means Mr Tole is able to increase his stocking rate, resulting in more lambs.

“Obviously if our ewes are lambing on good dry matter, that equates to better weaning weights and an earlier turn-off of lambs, which allows us to buy lambs in earlier, so it’s a snowballing effect,” he explains. “From the 15th July 2016, it was set-stocked with ewes and lambs all the way through to shut-up in late October. We lambed on it and then peaked up around 72 DSE/ha at a peak period to graze it into the ground.”

The lamb weight gains were impressive, with 63 days of grazing producing 525 kg of lamb per hectare, or 8.35 kg/ha/day, which Mr Tole was very happy with.

“We’ll keep growing Ascend until PGG Wrightson Seeds bring out something bigger and better, we’ve got no reason to change at this stage,” he says.