BROWSE OUR RANGE OF
FORAGE CEREALS

GOT QUESTIONS? OUR TEAM ARE
HERE TO HELP

Southern Green forage ryecorn was selected from a range of cereal trial lines that were tested at the PGG Wrightson Seeds Research Farm in Ballarat, Victoria. The trialling of the first lines of forage ryecorn was first conducted in 2006 during the extended drought that parts of Australia were experiencing at the time.

Southern Green was selected due to its early vigorous growth habit, which is superior to that of forage oats, commonly seen as the basis of quick feed.

Southern Green has excellent resistance to Cereal Cyst Nematode (CCN) which can be a significant problem in lighter soils around Australia. Southern Green if used in these soil types offers a great break crop due to this resistance.

Southern Green is also resistant to Take-all disease, Gaeumannomyces graminis spp. which is widespread across many of the broadacre cropping zones of Australia. 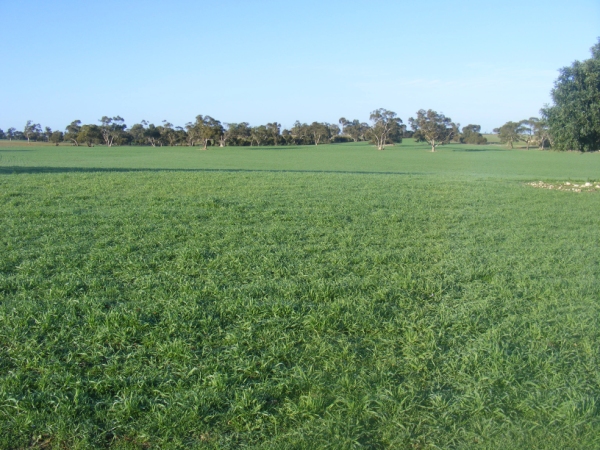 Southern Green has not shown any susceptibility to Rust, Puccinia spp. and if managed correctly, rust should not present an issue due to the canopy of the Southern Green being minimal or non-existent at the time when the rust would become present.

The graph below shows the significant increase in DM yield per kg/ha when comparing a variety of PGG Wrightson Seeds and common mix and straight options. Data from PGG Wrightson Seeds Winter Feed Trial (2008) showing total growth in 95 days from planting. Southern Green as a standalone crop or mixed with ryegrass tops the dry matter production over oats and common ryecorn.

Southern Green will establish best when sown at a depth of 10-25mm. If sown any deeper than this it will affect the rate of emergence and therefore potential yield in winter. Southern Green is a good companion to sow with an annual or Italian ryegrass as they both have the same sowing depth requirements.

Southern Green offers flexibility as to where it can be grown as well as what it can be grown with. It is suitable for areas where annual rainfall is as low as 400mm up to the high rainfall areas; it can also be sown into a range of different soil types while still offering quick winter feed.

Trial work has demonstrated Southern Green can produce excellent yields when mixed with an annual or an Italian ryegrass, extending the growing period as well as offering a cut of hay or silage.

To ensure that you get the greatest value and return when using cereals, we recommend you consider using Southern Green in a programme with oats. A paddock of Southern Green with at least one paddock of Cooee® Oats will deliver increased feed over a longer period.